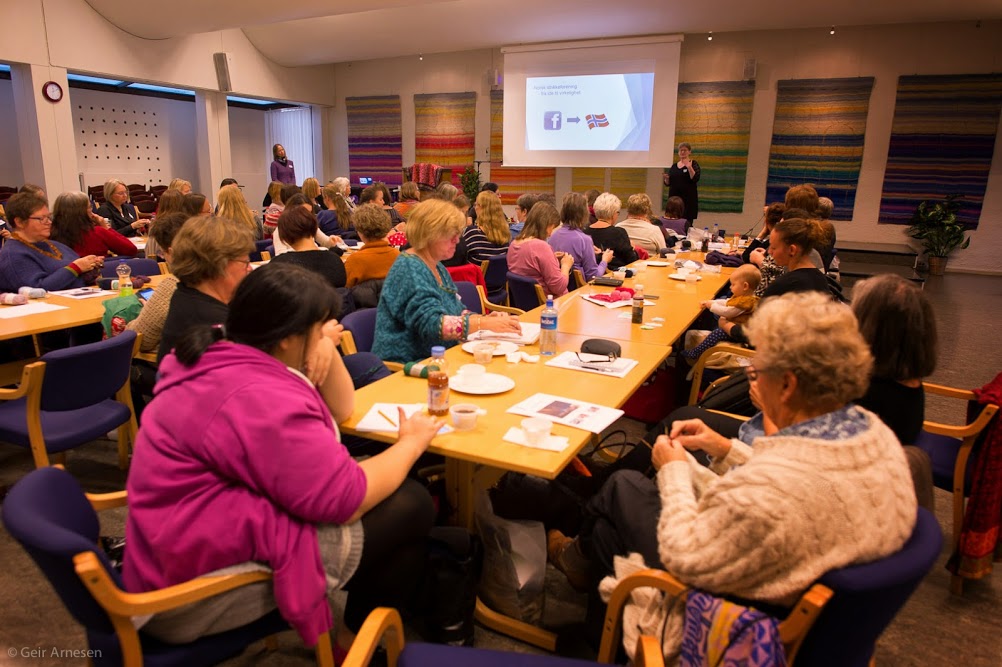 The Norwegian Knitting Association was founded on Saturday in Bragernes Menighetshus/Congregation Hall in Drammen, west of Oslo, in the company of nearly 70 knitters and the photographer Geir Arnesen – the only male present, married to designer and Vice Chair Tove Fevang. I spoke to many knitters who did not want to miss this event for anything in the world, and had traveled far to be present. The initiative was taken by Liv-Norunn Stavik after finding both the Swedish: Sticka and the Danish association: Gavstrik online, as she explains in the photo above. A group was set up on Facebook, and a webpage created for it – see Norsk Strikkeforening – before the search for the remaining board members began. It did not take long until a number of knitters had volunteered, and the board was complete. I agreed to hold a presentation on the topic “Vanskelig strikk/Difficult knitting”, in addition to Tove Fevang’s  presentation on “Enkel strikk/Simple knitting”. 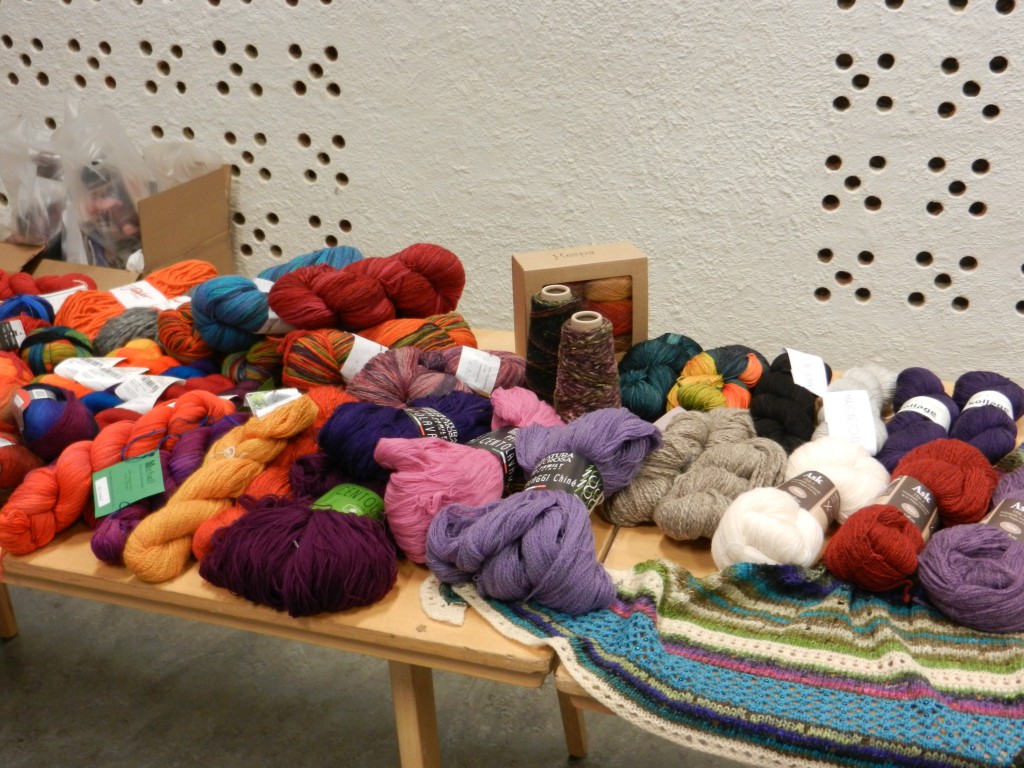 A few days in advance I was also asked to lead the meeting, and read through the articles of association for approval. I am not familiar with the founding of association but thought I would manage, merely based on my previous tour leader experience. The board had organized an exciting exhibition of their knitting books, large pattern selections, extensive yarn stash from all corners of the world, finished projects and work in progress (No UFO’s in sight). Take a look at these photos and you will understand what I mean. In addition they had made goodie bags, organized a serving point offering tea/coffee, waffles and “svele” similar to American pancakes, and a raffle with a large number of books plus yarn kits. The kick off for the meeting was at 11.00 but eager knitters came 8.30 in good time for the official 9.00 opening, and of course they were let in to study the exhibition, and to dig out their knitting. 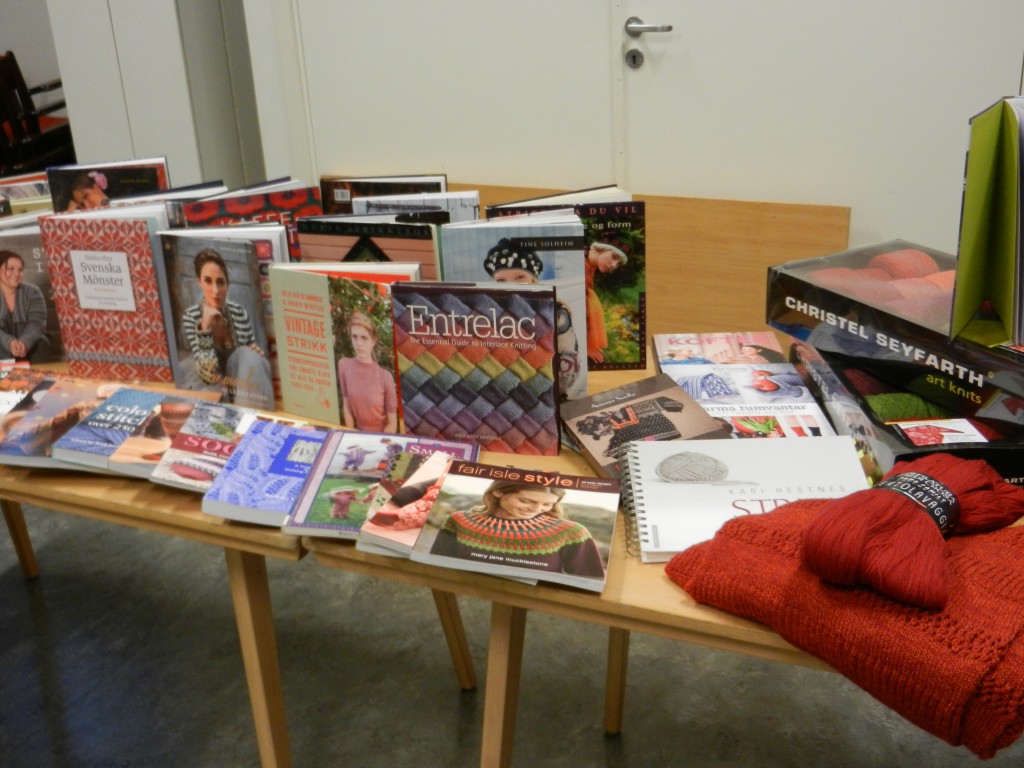 Accompanied to the sound of knitting needles in use, we began the meeting with Liv-Norunn talking about the intention of the association. Then continued with a brief presentation of the board members. There were no obviously no objections to the suggested board of members, and it was quickly approved to everyone’s delight. We did however reach a halt when the membership fee and its related articles were read. It was not the level of the fee, which actually was suggested raised from 250 NOK to 300 and half price for children, students, OAP and others on health benefits, but the possible dissolution of the association with its technical challenges that needed retuning. After a number of suggestions on this article, the remaining articles were all read with only minor interventions. The board suggested a coffee break to re-phrase the membership fee articles, and with a bit of aid of the knitters present, as well as a lawyer it was approved together with the remaining articles. 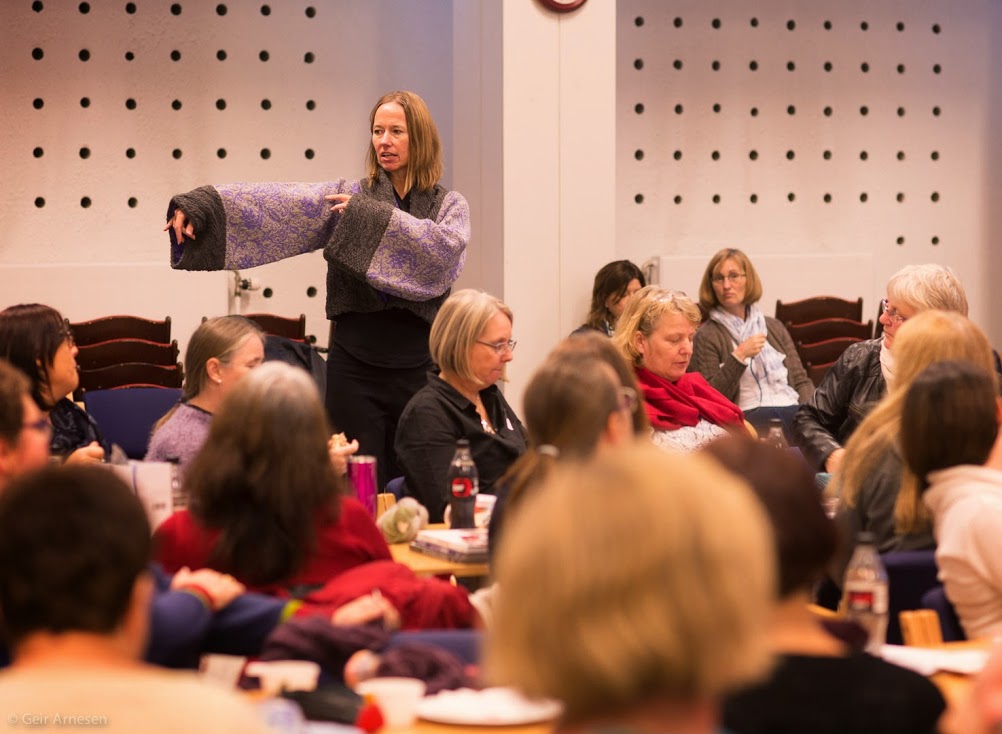 Future plans include a knitting party from the 19th to the 21st of June 2015 in Drammen and then every year, during the second weekend of June, a membership magazine called “På pinnen/On the needles” – a name voted for on the Facebook group – as well as a charity knitting program. These are only the first few suggestions and hopefully a lot more suggestions from members will come. The raffle draw was popular but a few book trades had to be done since some winners already had the book they won. After a longer break it was time for my presentation. I talked about my knitting experience and my attraction to more difficult stitch patterns. Above is a photo of me wearing a Kimono called Season of Darkness and Winter Light, see the aristrocrat of knitting books, by designer Margaretha Finseth from the book Norsk Strikkedesign.

Tove Fevang is the most acknowledged designer and published crafts author in Norway. She has a background as a designer, graphic designer and journalist, and has published 18 books. Tove was the initiative taker behind the Norsk Quilteforbund/Norwegian Quilting Association which was set up in 1988 and the well known face of the Amanda Prosjektet – a charity set up to knit for premature babies, see Aftenposten. 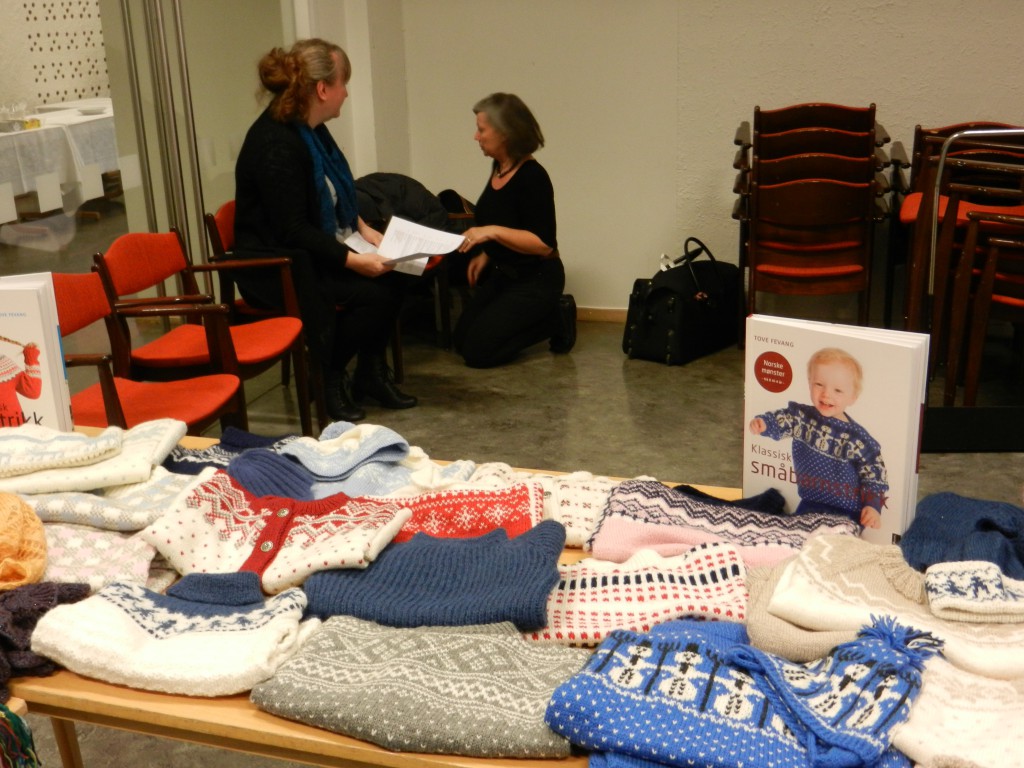 Here are Tove’s exhibition table with 2 of her books, featuring her grandchild on the cover, photographed by her husband, Geir Arnesen. In the background preparing for the next part of the meeting is Tove and Jette Kjørseng. 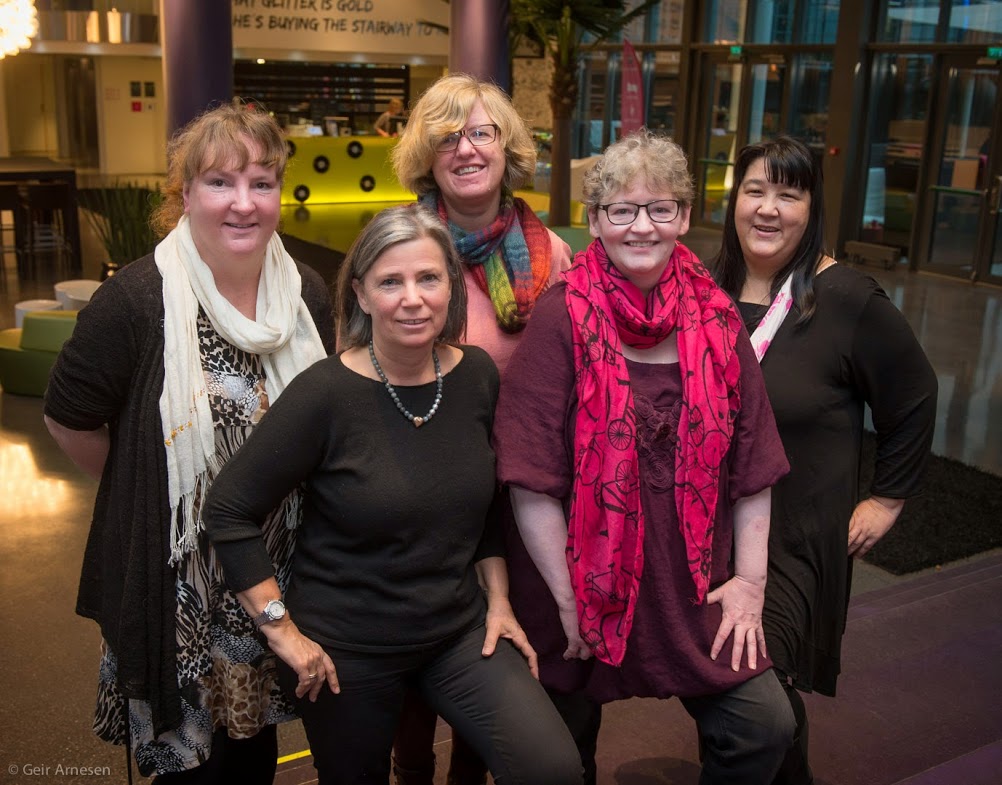 Here is the Board members, first row from right; Chair Liv-Norunn Stavik; Vice Chair Tove Fevang; second row from left; Cashier Jette Kjørseng; Board member Gunnhild Marie Hagen; Secretary Rita Stenseth.  There are many of us who are curious to know more, and whom will follow this association’s future work. We believe it will prosper, and encourage us all to do even more knitting!